This study examines a tapering dose of lisdexamfetamine in addition to treatment as usual in a population of adults being treated for methamphetamine withdrawal in an inpatient setting. We will recruit 15 people for a 7-day inpatient open-label safety and feasibility study with weekly follow up for 3 weeks post discharge. Participants will receive 250mg of lisdexamfetamine on day 1 of their admission tapered by 50mg per day to 50mg on day 5. Days 6 and 7 are medication free to monitor for withdrawal symptoms and ensure participants are stimulant free upon discharge. The primary outcome is safety and feasibility with secondary outcomes of acceptability, retention in treatment, withdrawal symptoms and craving, and effects on sleep.

The University of California, Los Angeles/Family Medicine/Psychiatry and Biobehavioural Sciences

The aim of The LiMA Study is to test if lisdexamfetamine is effective in reducing methamphetamine use, cravings and withdrawal symptoms. 180 people with methamphetamine dependence will be recruited to the LiMA Study, which will be conducted in specialist treatment centres in Sydney, Newcastle, Adelaide and Melbourne. Participants will be randomly assigned to receive either a 15-week intervention consisting of induction (1 week of 150mg lisdexamfetamine [LDX] or placebo), maintenance (12 weeks of 250mg LDX or placebo) and reduction (1 week of 150mg LDX or placebo and 1 week of 50mg LDX or placebo). All participants will be given access to 4 sessions of Cognitive Behaviour Therapy (CBT) as treatment-as-usual and receive a 4-week follow up appointment. A full protocol for the study has been published here.

The LiMA study is no longer recruiting. This study has been approved by the Human Research Ethics Committee of St. Vincent’s Hospital, Sydney, Australia (HREC/16/SVH/222).

School of Medicine and Public Health, University of Newcastle

A qualitative study exploring diverse cultures, practices and experiences of GHB use among heterosexual, cisgender and transgender Australians

This study is currently open for recruitment. If you would be interested in participating please visit nccred.org.au/ghb

This study is currently open for recruitment. If you would be interested in participating please visit nccred.org.au/ghb

GHB harms are increasing in Australia, with a significant increase in people coming to the emergency department with GHB toxicity. However, no research has sought to understand how, why and where people who identify as heterosexual and cisgender or transgender use GHB. We are hoping you can help shed some light.

The GHB Cultures, Experiences and Practices Study is the first Australian study to specifically examine GHB use among heterosexual and cisgender or transgender people. This study will explore the varied ways that people use GHB, the benefits and harms associated with GHB use and strategies that heterosexual cisgender or transgender people use to prevent harms.

The knowledge generated by this study will be used to inform the delivery of harm-reduction resources and health and wellbeing programs. The National Centre for Clinical Research on Emerging Drugs are leading this research in partnership with researchers from the St Vincent’s Hospital Sydney, University of New South Wales, The University of Sydney and La Trobe University.

This study has been approved by the St Vincent’s Hospital Sydney Human Research Ethics Committee (REF:2021/ETH11824).

The Substance Use and Sex Index (SUSI) addresses a lack of tools for measuring transmission-risk behaviours alongside HIV treatment and prevention innovations, and the context of drug use such as “chemsex” / “party and play”

Neither substance use nor sexual behaviour is inherently ‘risky’, but we do know that there is some relationship with transmission of HIV, sexually transmitted infections (STIs) and other blood-borne viruses (BBVs). We therefore need to make sure we have a way to effectively measure risk behaviours.

The new SUSI tool will provide a more effective way of measuring risk behaviours compared with tools that are currently in use. SUSI has the potential to support the effective treatment of substance use disorders as well as support effective prevention, treatment and care relating to HIV, STIs and BBVs. If you would like further information on the study, or would like to participate, go to the SUSI website by clicking here. (Approved by St Vincent’s Hospital Sydney Human Research Ethics Committee, reference number: LNR/18/SVH/31; and the ACON Research Ethics Committee reference number: 2018/02)

Barriers to stimulant treatment access for women who use methamphetamine in inner Sydney: a qualitative study

Methamphetamine use can lead to a wide variety of complex physical, psychological and social problems. Globally, women are under-represented in treatments for substance use disorders, making up a third of those who use drugs, but only a fifth of those in treatment.  Specialist treatment programs which provide non-judgmental harm minimisation and risk stratification are increasing, but little is known on whether women have appropriate access to such services or if there are specific needs which should be addressed to encourage engagement. There is a lack of qualitative research into the gendered experiences of women who access services for methamphetamine, and the potential barriers to treatment. In this study, the experiences of women who were frequent (at least weekly) users of methamphetamine, but were not engaged in treatment were explored. 11 semi-structured interviews were conducted at four sites in inner Sydney with women who use methamphetamine. Interviews were recorded, transcribed verbatim, and continued until saturation had been reached. Thematic analysis using Nvivo® software is now being carried out.

Ethics approval for the study was granted by the Human Research Ethics Committee of St. Vincent’s Hospital, Sydney (Approval LNR/15/SVH/469).

A qualitative study exploring diverse cultures, practices and experiences of GHB use among LGBTQ Australians

Gamma Hydroxybutyrate (GHB)  (and its precursors, gamma-butyrolactone [GBL] and 1,4-butanediol [1,4-BD]), at high doses, becomes a potent central nervous system depressant. GHB is a recreational ‘party drug’, consumed at festivals or other night-time settings (pubs, clubs). GHB carries a high risk for harms, including coma due to overdose; dependence and withdrawal; and polydrug complications; all of which often require intervention.

GHB associated harms are increasing worldwide, including in Australia. In one Australian study of 76 people who used GHB, half experienced overdose with loss of consciousness. Between 2012 and 2019 there was a 147% increase in the prevalence rates of GHB-related ambulance attendances in Victoria (n=5,866 attendances in 7 years).

There is a relatively low prevalence of GHB use among the general population in Australia (0.1% of adults within the previous 12 months), however gay and bisexual men (GBM) report using GHB at a rate nearly 20 times greater than the general population. In the SWASH periodic survey of lesbian, bisexual and queer (LBQ) women in Sydney, 2.6% of 1,272 participants had used GHB. No Australian studies have reported the prevalence of GHB use among trans and gender diverse populations; however, in the 2018 Australian Trans and Gender Diverse Sexual Health Survey, 15.8% of 1,632 participants reported sexualised drug use within the last 12 months.

Despite heightened prevalence of use there are no specific qualitative data to generate understandings of social and cultural components of GHB use among LGBTQ Australians. Most research on GHB consumption among LGBTQ populations has considered GHB use in sexual contexts, with exclusive focus on GBM. Little research has examined GHB use among broader LGBTQ communities, nor examined the contexts of GHB use, its functions and impacts.

Dominant theories that explain drug use among LGBTQ populations do not adequately capture the complexity of the phenomenon and as a result are of limited utility to health promotion, clinical and other alcohol and other drug sector practitioners. One such theory, the minority stress theory, hypothesizes that members of minority groups encounter discrimination at a societal level resulting in stressors abated by substance use. This perspective does not capture the role that drugs play in sociability, pleasure and belonging.

This study will be the first Australian study to qualitatively describe the contextual and cultural practices associated with GHB consumption across LGBTQ communities. These data will allow for evidence-based programmatic outputs at three partner organisations, ACON, Thorne Harbour Health (THH) and the Western Australian AIDS Council (WAAC).

Setting the research priorities for NCCRED

To focus the clinical research efforts of the Centre, the NCCRED priority setting study (2019) engaged nationally with key alcohol and other drug clinical, research, and consumer stakeholders in Australia to determine clinical research priorities. The study undertook the guidance provided in the Nine Common Themes of Good Practice, a published checklist for guiding research priority setting procedures. These are: context; comprehensiveness of approach; inclusiveness; information gathering; planning for implementation; criteria; methods for deciding on priorities; evaluation; transparency.

The study consisted of four phases: 1) an online survey of stakeholders; 2) a qualitative thematic analysis (assessment of survey responses); 3) a brief literature review assessing the themes identified by respondents against published peer-reviewed data, and; 4) presentation of all results and literature reviews to an independent expert panel. The NCCRED Methamphetamine and Emerging Drugs Clinical Research Network working group functioned as the expert panel. Results were ranked, and the top three priorities for methamphetamine clinical research and the top three priorities for emerging drugs clinical research were presented to NCCRED and the NCCRED Board.

Safety and tolerability of oral lisdexamfetamine in adults with methamphetamine dependence: a phase-2 dose-escalation study

Background: Methamphetamine (MA) dependence is a growing global health issue with no effective pharmacotherapy. Lisdexamfetamine (LDX) is approved for use in the treatment of attention-deficit/hyperactivity disorder (ADHD) and binge eating disorder (BED) in doses ranging from 30 to 70mg/day. LDX has a longer duration of action and lower abuse potential than other amphetamines, and presents a promising candidate for agonist-type treatment of MA dependence. People seeking treatment for MA dependence may require doses of LDX higher than used in ADHD and BED. We examined the safety of LDX at 250mg/day among adults with MA dependence, approximately equivalent to previously trialled doses of dexamphetamine.

Methods: We conducted a dose-escalating, phase-2, open label, single-group study of oral LDX at two Australian drug treatment services. Eligible participants were MA dependent adults who reported use of MA on at least 14 of the preceding 28 days. Once daily, supervised LDX doses of 100 to 250mg/day were provided as a single-blinded, ascending-descending dose regimen over 8 weeks. The primary outcomes were safety, drug tolerability, and regimen completion at the end of Week 4 (maximum dose). Participants were followed through to Week 12. Secondary outcomes included: change in MA use; craving; withdrawal; severity of dependence; risk behaviour; change in other substance use; medication acceptability; potential for non-prescription use; adherence; and neurocognitive functioning.

Conclusions: LDX at a dose of up to 250 mg/day was safe and well tolerated in this population, with high retention. Larger trials of LDX as a pharmacotherapy for MA dependence are warranted.

The University of Sydney 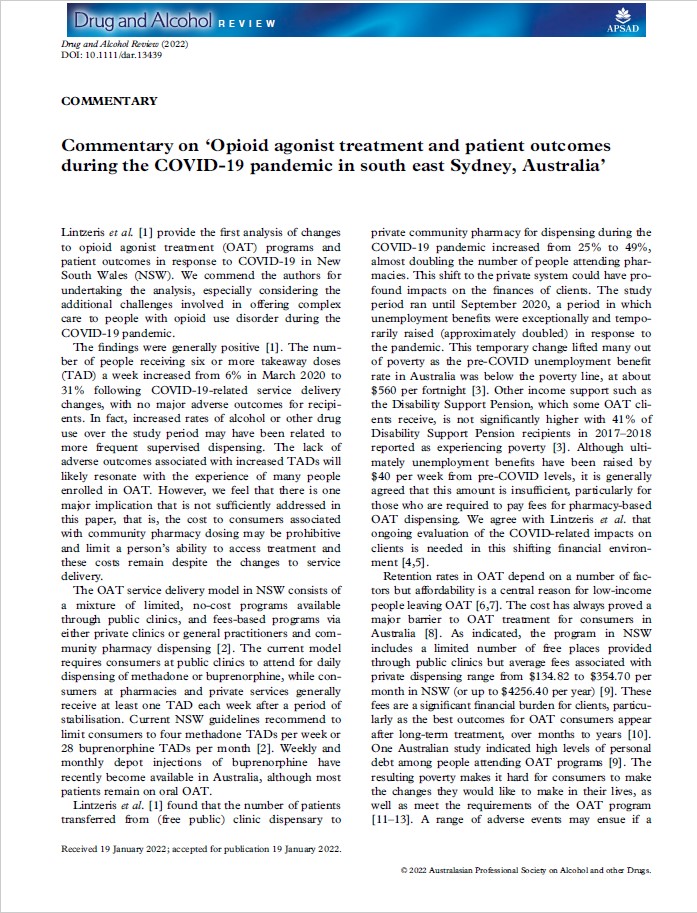 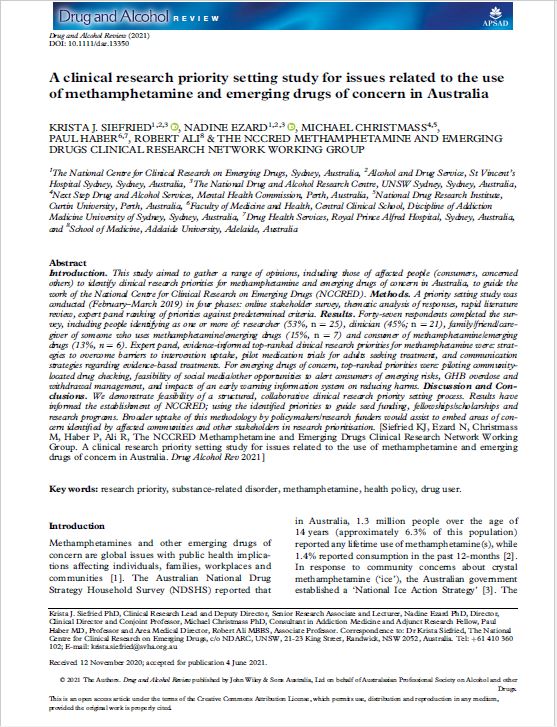 Siefried KJ, et al. A clinical research priority setting study for issues related to the use of methamphetamine and emerging drugs of concern in Australia 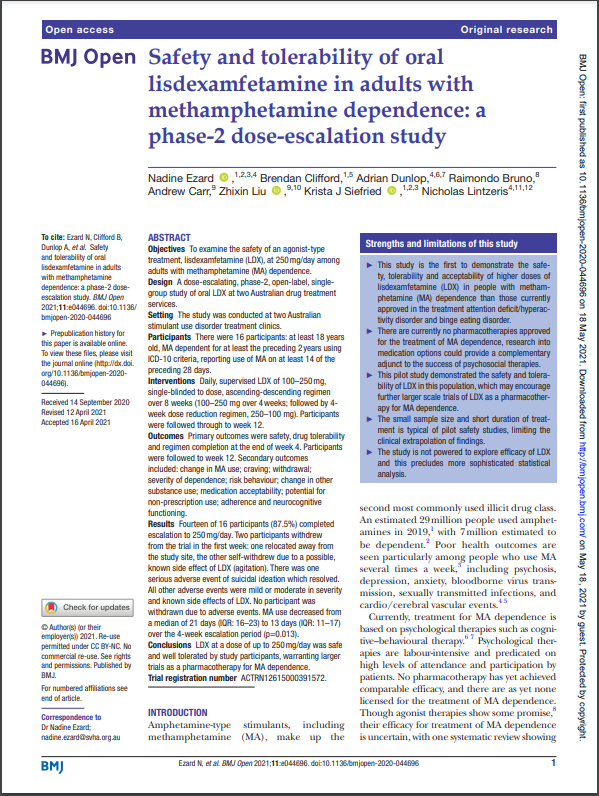 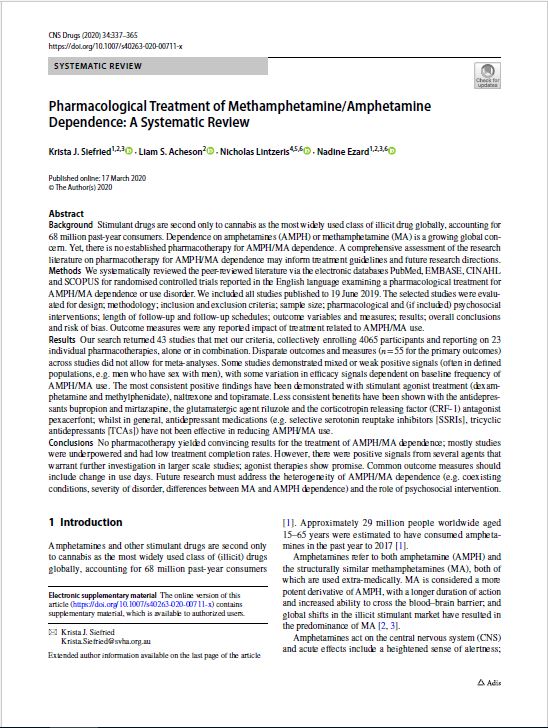 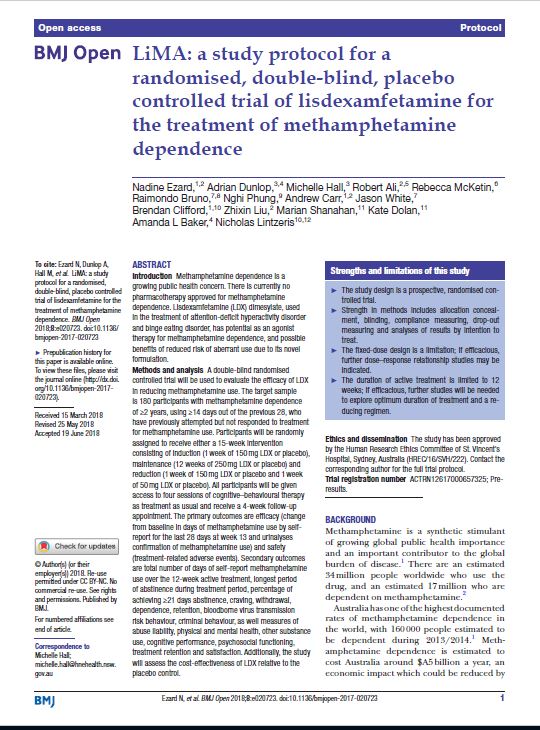 Ezard N, et al. LiMA: a study protocol for a randomised, double-blind, placebo controlled trial of lisdexamfetamine for the treatment of methamphetamine dependence. 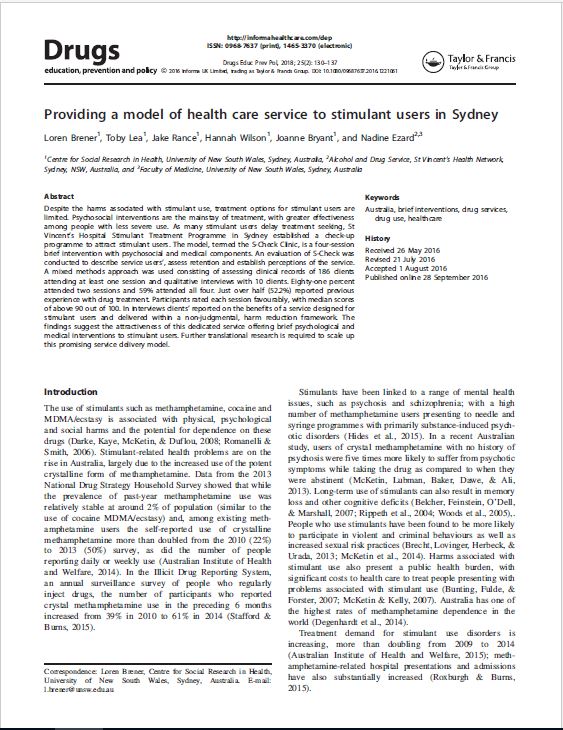 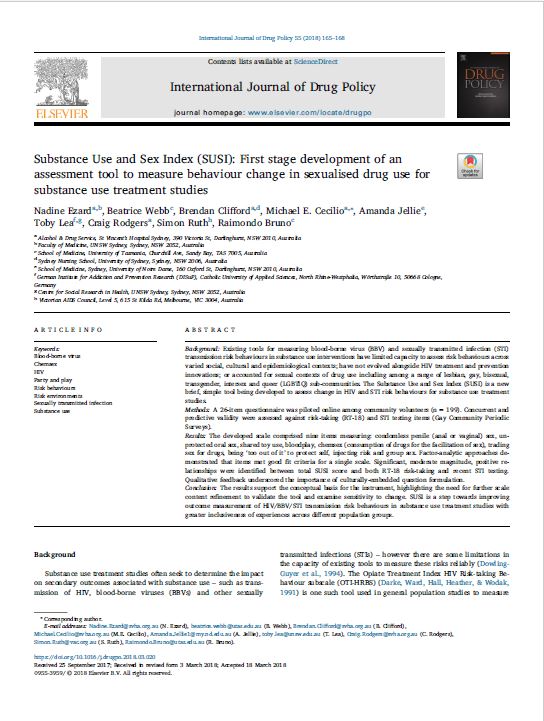 Ezard N, et al. Substance Use and Sex Index (SUSI): First stage development of an assessment tool to measure behaviour change in sexualised drug use for substance use treatment studies. 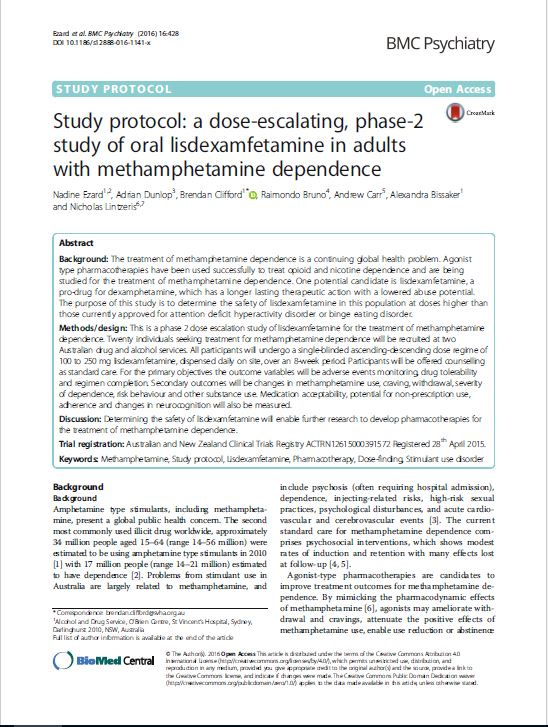